First in a three-part series

This series, verified by federal court documents, reveals the covert, step-by-step, and often unethical methods used by corporate giant Eastman Chemical (NYSE: EMN) to create incomplete, questionable and sometimes tortured science in order to mislead consumers, regulators, its customers and use as evidence in a lawsuit designed to drive a small competitor out of business.

Note: Eastman Chemical is also the manufacturer of MCHM, the chemical in the huge West Virginia river pollution incident. The company has been accused of inadequate testing of that chemical and deliberately downplaying its toxicity in official documents. For more, see: MCHM could be more toxic than reported, new study says.

Millions of Americans who have flocked to buy products without BPA which can disrupt the body’s hormone system by imitating the sex hormone estrogen. This can cause or promote cancer, developmental defects, Alzheimers, Type 2 Diabetes, obesity, infertility and more.

Estrogenic action is the sort of thing that prompts breast cancer cells to grow out of control and can contribute to many other serious diseases. (For more, see Why Is “Estrogenic Action” Important?)

“BPA-free” is a covert game of whack-a-mole. In fact, it employs the same deceptions played by designer drug makers. When a drug is outlawed by its specific chemical structure, creative chemists manage to tweak the compound and make it legal by adding few different atoms to the now-banned molecule.

In this case, the Nalgene bottle, while BPA-free, contains another plastic — Tritan — which its manufacturer intensively promotes as “EA Free” — meaning that it is not only BPA-free, but free of estrogenic action .

(Eastman is not the only chemical company misleading the public with its deceptive “whack-a-mole shell game. For more on that, see this March 2015 peer-reviewed study in the NIH journal, Environmental Health Perspectives: Bisphenol S and F: A Systematic Review and Comparison of the Hormonal Activity of Bisphenol A Substitutes).

The Conspiracy To Concoct Fake Science

However, the product has been so profitable that Eastman has knowingly engaged in a cover-up, deceptive advertising, scientific misconduct and out-right lying to consumers like Becker and big customers like Whole Foods, CamelBak, Phillips and others.

In the process, it has engaged in a conspiracy that involved a deceptive Tritan scientific study using several private labs, one of which has been banned from doing business with the federal government for ethical violations.

The deceptive scientific study was then published in Chemical And Food Toxicology, a scientific journal whose editors were aware of the paper’s flawed nature but published it anyway and intentionally omitted key conflict of interest disclosures.

None of this should be surprising because the journal was founded by A. Wallace Hayes, a “scientist” who, we will see in this series, spent much of his career with R.J. Reynolds trying to debunk science on the harmful effects of secondhand tobacco smoke.

The tainted study was then used as a key piece of evidence in a lawsuit brought by Eastman to silence a critic who had exposed Tritan’s Estrogenic Activity.

With the help of the deceptive study, Eastman eked out a very narrow federal jury verdict in a trial where an angry judge went on the record to state that the verdict was not justified on the evidence presented. The verdict was upheld on appeal based on purely procedural issues not related to the dishonesty of the study and other misconstrued evidence used to persuade the jury.

The deliberately flawed Eastman study and its heavy promotion is symptomatic of a much larger problem caused by a lack of federal oversight, incompetence on the part of federal agencies and the malignant presence of scientifically tainted people like Hayes who are in the pockets of industry but still serve on federal advisory committees. 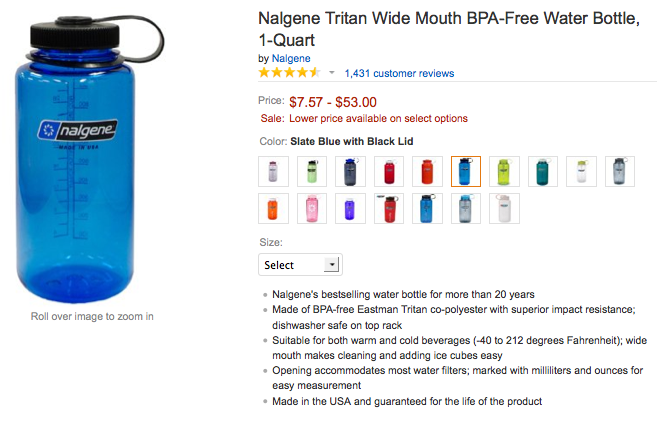 This practice is aided, especially in the regulatory approval process, by the use of trade secrets and studies that are not peer reviewed.

While most of these carefully biased studies slip by for lack of clear proof, the evidence sometimes comes out in unanticipated ways, such as in court documents and testimony.

And this is exactly what happened when Eastman sued to put two small competitors out of business.

The lawsuit, filed in U.S. District Court for the eastern District of Texas in 2012, went after CertiChem and PlastiPure after they revealed that Eastman’s prized plastic — Tritan — was not free of hormone-imitating chemicals as it had been advertised.

Over the course of this series of articles, we’ll piece together the evidence filed in the court case to describe how Eastman used trade organizations to launder funds for hired-gun scientists paid to to attack the CertiChem/PlastiPure revelations which had been published in the peer-reviewed scientific journal, Environmental Health Perspectives.

Eastman went to great lengths to hide the conflicts of interest in that proxy letter tactics, and in a later tainted study it covertly funded and had published in another science journal. (Part 3: Eastman Covertly Stretches Peer Review Until It Breaks).

Significantly, that journal, Food and Chemical Toxicology, refused to deny that it conspired to conceal the conflict of interest statements and that the principal author used his position to publish a deliberately flawed paper. The journal’s Founder and Editor-in-Chief — A. Wallace Hayes — formerly headed the R.J. Reynolds Tobacco Company’s effort to discredit science showing the harmful effects of smoking.

Court records also show that the covertly funded study along with other secretly funded activities by Eastman were also used to mislead large customers like Whole Foods, Thermos and Philips.

See “Misleading Whole Foods, Stonewalling Thermos” for that part of the story.

Eastman’s secret ghostwritten study was eventually used as the centerpiece in a lawsuit it brought designed to drive the whistle-blowing company out of business.

Eastman managed to get a mostly symbolic win, but it was denied all of the monetary damages it sought. See: Eastman Ekes Out Equivocal Lawsuit Win, Judge Says Verdict Not Necessarily Based On Trial Evidence.

In The Beginning: Eastman Marketed Tritan Plastic As A Safer, “BPA Free” Alternative

When hormone disruptor battles heated up in 2008 over the presence of Bisphenol A (BPA) in plastics (“Plastic-bottle scare is a boon for some”) Eastman began promoting its Tritan product as the “safe” alternative.

But CertiChem and PlastiPure entered the market in 2009 and threatened those Eastman safety claims.
The two companies were founded by University of Texas neurobiology professor George Bittner who has patents on detecting chemicals like BPA which exhibit Estrogenic Action (EA).

EA is significant because a major scientific study funded by the National Institutes of Health and the European Commission found:”… [E]vidence that endocrine disruptors have effects on:

See “Why is Estrogenic Action Important?” for more details.

When Bittner’s companies began testing consumer products in the marketplace it found most — including Eastman’s Tritan plastic — leached EA when tested under everyday stresses. Their testing, funded with a grant from the National Institutes of Health examined more than 500 products and found more than 90% gave off EA-causing chemicals.

Their findings were published in the peer-reviewed scientific journal, Environmental Health Perspectives in 2011. (“Most Plastic Products Release Estrogenic Chemicals: A Potential Health Problem That Can Be Solved”).

The EA findings regarding Eastman Chemical’s Tritan have also been confirmed by other scientists. One such study funded by the European Union found Tritan leached BPA in addition to other EA-causing chemicals. (Migration of plasticisers from Tritan™ and polycarbonate bottles and toxicological evaluation).

Eastman Takes Notice Of Competitive Trouble In The Marketplace

Based on its testing results, PlastiPure/CertiChem began contacting manufacturers to offer EA testing services and to offer them safer plastics.

Court records and trial testimony show that Eastman Chemical knew by at least 2008 that Tritan plastic was guilty of EA. But, it continued to market Tritan as EA-free, while trying to ignore Bittner’s companies.

However, it found PlastiPure and CertiChem increasingly competitive. Eastman’s concern increased when including manufacturers considering the use of Tritan in their products inquired about the plastic’s EA characteristics.

The issue would grow serious enough to force Eastman to turn down a major customer rather than allow them to test Tritan for EA.

According to emails submitted as evidence in the court proceedings alarm bells sounded on May 7, 2008 when a Camelbak executive — whose products had also tested positive for EA — sent a PlastiPure news release to Eastman executives declaring it “a new low for fear marketing.”

Eastman marketing executive Jeremy Galten forwarded the email (below) to colleagues asking for “comment on the company below [PlastiPure] and any vulnerability that Tritan has to additional endrocrine/estrogenic disruptors.”

The reference to “additional” indicates that the company was already aware of EA in Tritan. 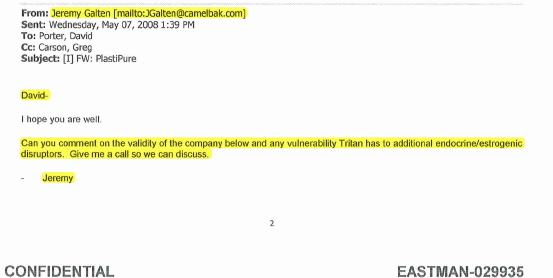 That same day Eastman executive Greg Carson, who had been cc:ed on Galten’s vulnerability email, indicated that he had received a sales lead (referred by CamelBak) from baby-products manufacturer Adiri. and that Eastman should avoid sending Tritan to be tested by PlastiPure/CertiChem. 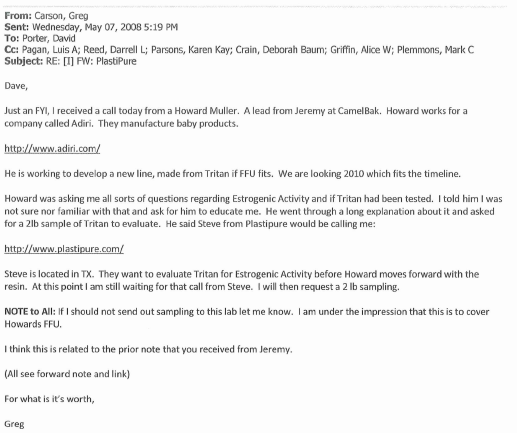 According to the email, The Adiri contact, “was asking me all sorts of questions regarding Estrogenic Activity and if Tritan had been tested. I told him that I was not sure nor familiar with that and ask him to educated me. He went through a long explanation about it and asked for a 2lb sample of Tritan to evaluate. He said Steve from Plastipure would be calling me.”

Carson’s claim of ignorance conflicts directly with Tritan’s main marketing themes. Those widely-promoted marketing points, from Tritan’s inception, were that that it was EA-free and BPA-free. See: Plastic bottle concerns boost sales of new Eastman product.

Over the next five days, Eastman emails showed corporate personnel scrambling to come up with excuses to delay a response until they could perfect their “messaging” on how to respond to the request for Tritan samples to test.

After Eastman’s stonewalling got Adiri nowhere, they asked PlastiPure to see if samples would be available for testing.

Finally, after contacts with Eastman’s legal, scientific and PR staff, the decision was made that they should simply refuse to do business with Adiri rather than try to finesse the actual EA facts of Tritan.

On May 12, 2009, Deborah Baum Crain, director of copolyester innovation with Eastman’s Specialty Plastics Business Organization, emailed the growing list of company execs: “My suggestion is to advise Adiri that we are very busy with all of our launch activities and are not activating additional infant care customers at this time … That ends the need to sample PlastiPure on behalf of Adiri.” 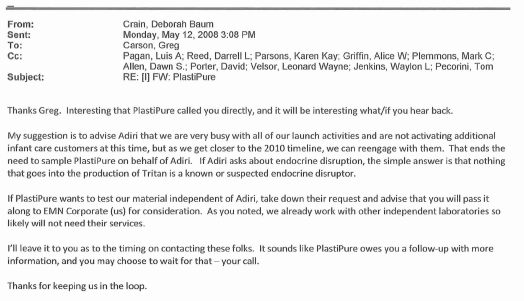 Tritan’s EA Difference Without A Distinction

In the next article in this series, we will find that Crain’s final suggestion lays out the core of Eastman’s subsequent campaign of deception: “If Adiri asks about endocrine disruption, the simple answer is that nothing that goes into the production of Tritan is a known or suspected endocrine disruptor.”

Crain’s first loophole is the fact that Eastman execs often confuse the issue by using “Tritan” to refer both to the finished plastic and to the three main monomers used to make plastic.

Monomers are the base chemicals to make plastics. They undergo a variety of processes that links them in the long chains known as polymers. Finished plastics, made from a variety of monomers have many added ingredients: colors, stabilizers and other chemicals. Many of these added chemical ingredients exhibit EA. In addition, new chemical compounds can form when monomers are transformed into polymers. These new compounds may display EA.

Eastman’s scientific personnel knew early on that the separate Tritan monomers, when tested individually, would be EA-Free. But they also knew that finished Tritan plastics exhibited Estrogenic Action.

Few people other than polymer chemists know about this “difference without a distinction”– Tritan as three monomers or Tritan as a finished plastic.

As we will see from more emails and court testimony, this difference without a distinction would be used in coming years to confuse the issue, deceive consumers, mislead a federal jury and to sue PlastiPure and CertiChem in an attempt to drive them out of business.

NEXT IN THIS SERIES