By Lewis Perdue on March 20, 2020 in Uncategorized

To understand, first imagine you are owed a great debt.

The person who owes you money gives you a choice, but you have to respond right then.

A penny now, then two pennies the next day, and four the day after that. And so it continues for 30 days, doubling the pennies each day.

Which would you choose?

Most people choose the million upfront. After all, #2 seems like a losing choice because the numbers appear to add up too slowly. 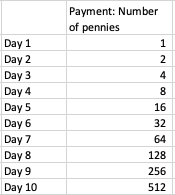 2/3 through the month and the $1 million still looks like a better deal. 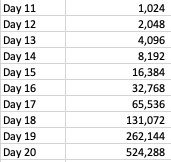 Then things explode as the effects of exponential growth become apparent 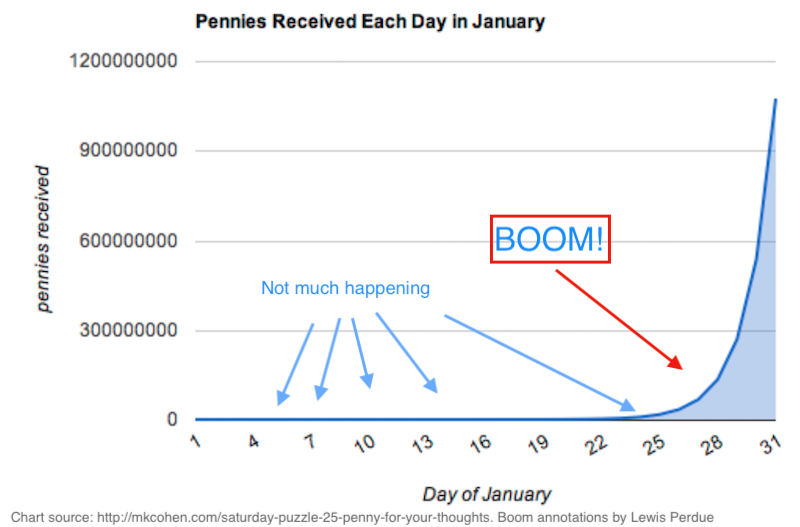 $21+ Million in pennies is clearly the best bet

And you will have plenty of funds to pay people to package all the pennies up and get them to the bank.

But how does that connect to COVID-19?

It’s all about second almost identical chart which shows the exponential growth of Coronavirus cases in the United States. 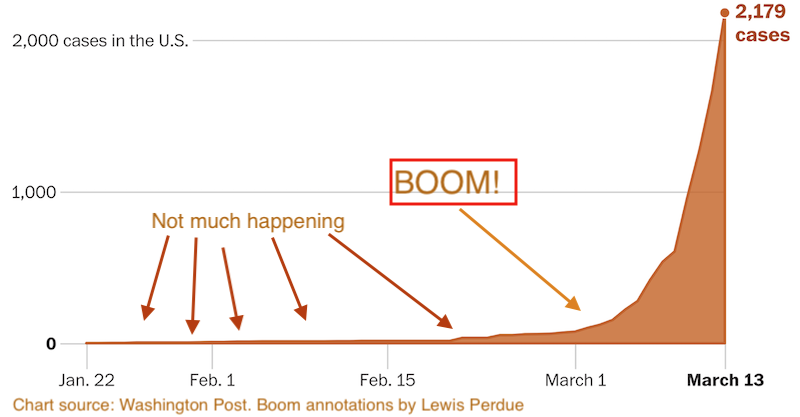 Just as the case of the penny payments disguise the huge amount at the end, the deceptive low levels of Coronavirus cases at the beginning have fooled many from realizing the coming onslaught.

Why is it vital to act quickly?

Take your Coronavirus as seriously as you should penny payments and the value of social distancing is apparent. In Coronavirus cases have dropped sharply in South Korea. 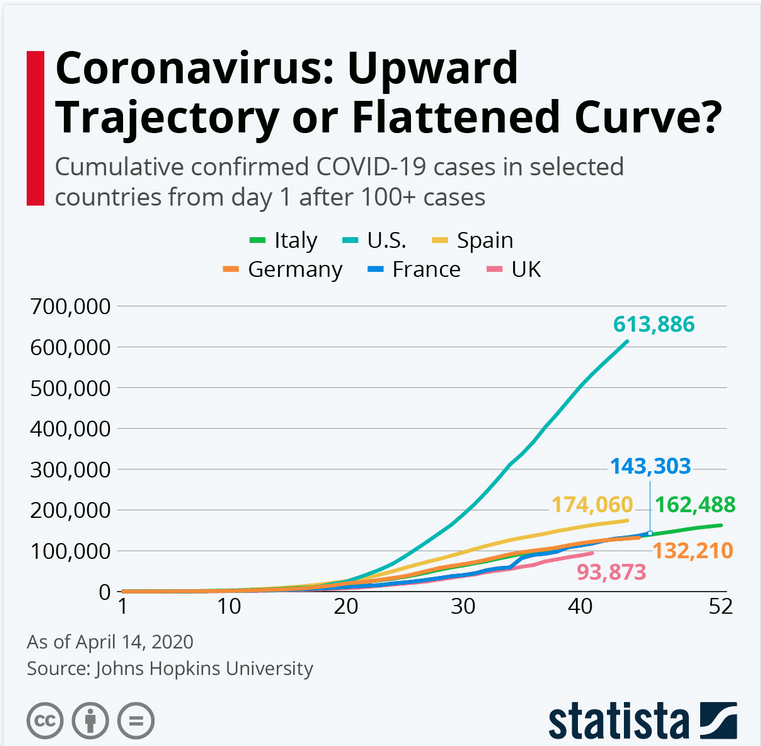 What’s the secret to success? In South Korea, quick action, preparedness along with testing and strict quarantines are credited with “flattening the curve” and preventing it from going exponential.

Why does this make a difference?

Think about the penny payments

If payments stopped around days 9-15, the total would be WAY less than 21+ million. Think of virus cases as pennies. If you stop the process, you avoid the BOOM!  like S. Korea did.

The earlier the better

The chart, below, is one of many in a brilliant article by  Tomas Pueyo. It projects a 40% reduction in cases with just a single day’s difference in starting social distancing. 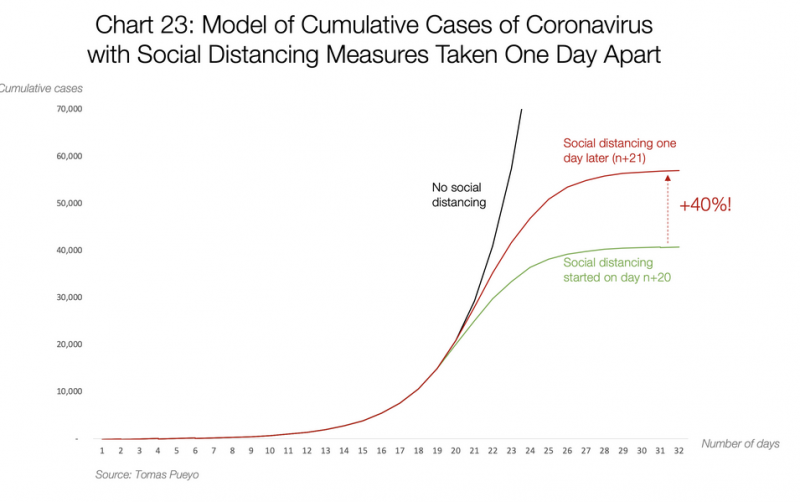 Take care of your pennies and coronaviruses

There is an old adage that says, “take care of your pennies and your dollars will take care of themselves.’

This is the part about how you kill Grandma …

A large percentage of people with COVID-19 may not show symptoms — Some estimates are as high as 50% to 78%. These people are known as “silent spreaders.” This article from the Wall Street Journal is a good background read.

It’s unknown so far how many people can be infected by a single silent spreader.

A CDC study using contract tracing in Chicago indicated that one silent spreader infected 16 people who attended a family funeral. Three of those subsequently died. 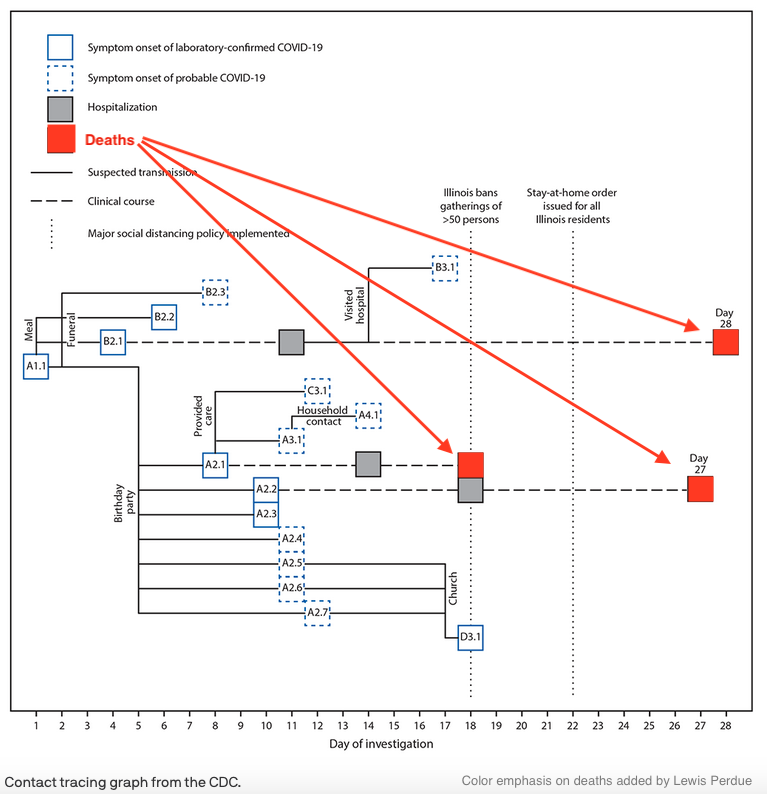 If a silent spreader infects only — 2  — other people, that’s the same geometric increase as the example of the 2 billion pennies 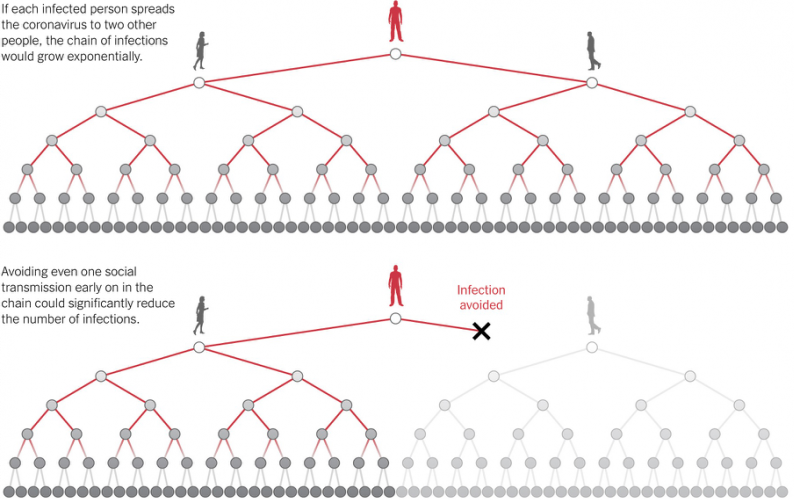 NOTE: Exponential and geometric growth are mathematically slightly different but represent the same sort of phenomenon.

Coronavirus/COVID-19: Face masks actually CAN help. Also beware the threats from restroom hand dryers, poop & toilet flushing
Mass(k) Confusion: Some masks ARE useful for COVID-19 prevention. Here’s how to tell which one is best for you. (And the science of why)