In addition, the number of variations (analogues) of Bisphenol A is growing.  The developments are driven by the marketing desire to brand a product “BPA free.”

There are now at least 24 and all have been found to rival BPA’s harmful nature..

According to the National Toxicology Program which looked at 24 analogues and found: “BPA analogues that are potential replacements for BPA have biological activity within the range of activity observed for BPA.”

Other published research also indicates that these analogues are just as bad for health as old-school BPA.

Because chemical companies have the financial resources to keep on concocting new formulas faster than scientific research can keep up, the word on the dangers of the new variations also lags.

“Clearly environmental health research cannot keep ahead, or even keep up with the rate and number of new materials that modern industry is introducing into commerce” —  Bisphenols: More unnecessary surprises — a study of 16 of the 24 known analogues (see below). 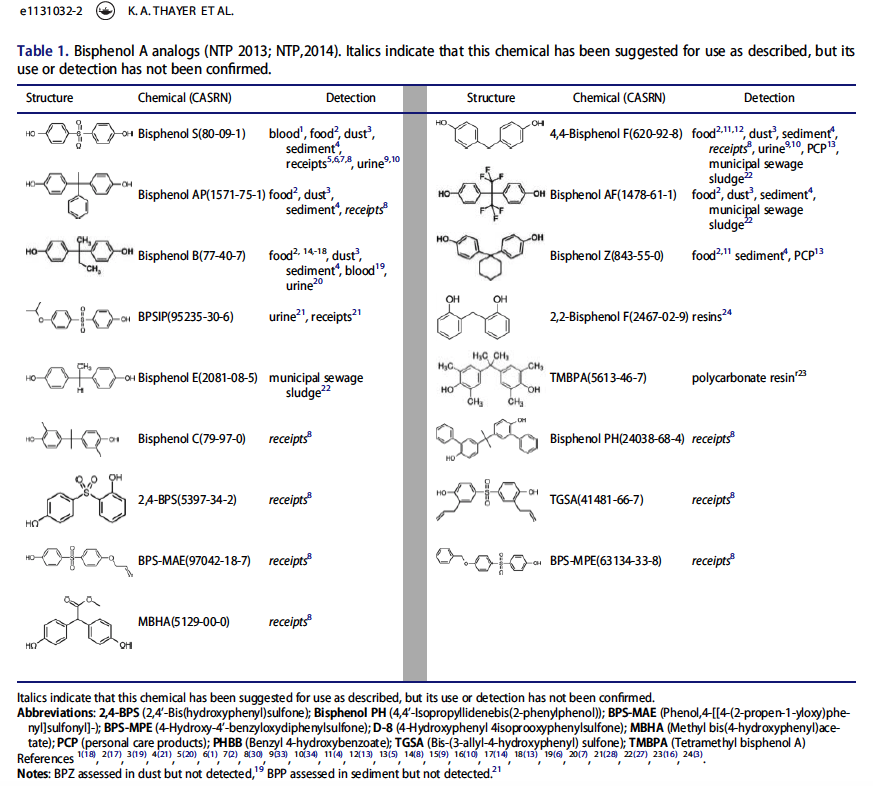 In many ways, this whack-a-mole —  “chemical arms race” — is like that for illegal synthetic drugs.

Every time a synthetic drug is outlawed, drug makers tweak the formula by adding (or subtracting) a few atoms without changing the psychoactive effects. This makes it a “new” formula which requires money and legislation to change.

Sometimes chemical companies are simply dishonest about their plastics

“Often plastics are labeled BPA free, but they can contain a derivative of BPA called BPS (bisphenol S), which may be as dangerous as BPA.

“Investigations about the effect of BPS on animals have demonstrated impact congenic to those of BPA.

“Similarly, a BPA/BPS substitute known as Tritan is a plastic marketed as BPA free. Tritan is a clear, sturdy, heat-resistant plastic made from triphenylphosphate, which is more estrogenic than BPA [Emphasis added]. There is leaching here too.

“One example of the use of Tritan is coffee take-out cups.

“BPA breakdown products also bind to the estrogen receptor, with a greater affinity (ka) than BPA itself. Not surprisingly, there have been many disorders linked to BPA and its derivatives, from autism to zebrafish hyperactivity, as many researchers try to link a cause and effect to research grants. Until more conclusive evidence is produced, only the aforementioned confirmed effects should be accepted.”

“The effect of BPA may last for generations (transgenerational inheritance).”

A handful of studies indicate that Tritan does not leach estrogenic compounds. However, given the provable dishonesty and subterfuge of its manufacturer to subvert the peer-review process (see links above), the credibility of those studies must be viewed with skepticism