By Lewis Perdue on July 17, 2019 in Hormone/Endocrine Disruptor Basics

Another reason that such small concentrations can affect you is that they operate inside of tiny cells that are complicated and fragile. And that makes it a matter both of scale and potency.

The cells in your body are like a well-run city maintained with carefully balanced mechanisms that produce energy, get rid of waste, provide a food supply, protect against foreign intruders, recycle used materials, and carry on myriad other functions. A cell also has workshops to manufacture proteins and other compounds, and a special secure library where all of the blueprints for the cell (DNA) are maintained.

It has a municipal government of sorts that monitors all of the various parts to make sure that all of the functions are carried out, that enough materials are being made and the right structures are being constructed in the right place. Cells also have a paramedic and repair system that can detect and often repair damaged parts.

When growth stretches the city limits, the cell knows when to trigger mitosis and divide into two cells.

Conversely, when more damage is done to a cell than it can repair, the cell self-destructs in a process called apoptosis. When that happens, other body cells clean up the mess. If this happens in an orderly fashion, you never notice it. When things go wrong (as in an infection or contamination by toxic or endocrine disrupting chemicals) you get inflammation.

All of these many functions are as carefully balanced as multiple circus acrobats juggling goldfish bowls while standing on the shoulders of a unicyclist making his way along a high wire over Niagara Falls.

The cell manages to accomplish this high-wire act because it — like a city — has a communications system – signaling pathways — that allows all of the many moving parts to maintain contact with each in order to maintain their balance.

The signaling pathway doesn’t use radio waves, or sounds. Their communication is more like our sense of touch. Think of molecules in a signaling pathway as little robots or Lego people who pass a chemical from one to another like a baton. Or they might communicate with a fist bump. Sometimes our robots might fist bump, then join together and hop along to the next step in a sort of three-legged picnic race. They can also communicate with two or more molecular robots that take the cascade in more than one direction.

Whether bump or baton pass, that action sets off a cascade – a chain reaction — where the next molecule bumps into another one (or passes a baton) over and over again. All of this can be hard work for little chemical robots and that takes energy. Some of the steps in the cascade involve bumping into a molecule that gives them some new energy – like getting a battery recharge.

The bumps and batons keep on until something happens at the far end of the cascade: the cell divides, a protein is made, and a pore is opened in the cell wall to let in fuel or ten thousand other things.

And this is where hormones come in: They are molecules with a message.

Insulin is a good example because every cell has a receptor for it.

When you eat, your glucose (blood sugar) level rises. Glucose is energy you need, but high levels can damage your body. So, when things are working properly, your pancreas senses the glucose level and produces insulin. Your bloodstream broadcasts the insulin molecules through your entire body. When an insulin molecule docks with an insulin receptor on a cell wall, it doesn’t actually enter the cell. But it starts series of bumps and batons. 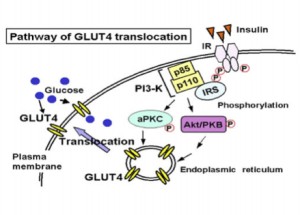 The insulin bump and baton signals go to a lot of places in the cell. It can interact with other signals to store energy or burn it, start cell growth or division. Or to make needed proteins.

But in its more familiar role, it tells the cell to open up a portal in the cell wall and start taking in glucose. This reduces blood glucose levels because when that gets too high, it can damage body tissues.

In reality, the mind-boggling signaling pathway is a lot more complicated than the simplified example above. In fact, it has more moving parts than a dozen maps of the London Underground as seen in the diagram below.

When you look at this, don’t worry about the bizarre complicated nature of the diagram below. Just take in all the lines and ovals. These represent some of the fist bumps and batons involved. Some? Yes, reality is even more complicated than this. 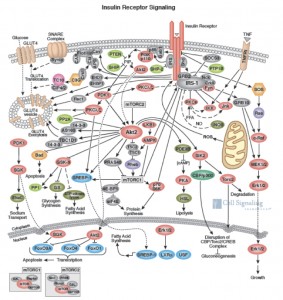 You should remember that if something breaks or misdirects one of those lines, or hijacks an oval, then the cell has a problem.

If the problem isn’t fixed, then lasting harm is done. That lasting harm could be one of the ten steps in the hallmarks of cancer. Or a prelude to metabolic problems leading to obesity or diabetes. Or Alzheimer’s or infertility. Right now, scientists realize that they have just begun to define signaling pathways and consequences.

Significantly, hormones are broadcast through the entire body in the faintest of signal strengths: parts per billion or parts per trillion. Kind of like a weak WiFi signal as contrasted with nerves which are like a hard-wired internet connection.

Hormone receptors are a bit like tiny molecular noses, constantly sniffing, but never reacting to anything but the right hormone that fits perfectly with it. Cells have receptors for many different hormones – thyroid, estrogen, androgen, growth and more.

But, in the hormone’s relatively faint WiFi communication, EDCs can be disruptive noise, a phishing scam or a hacked message. They may fit a receptor and cause the cell to start a cascade for something it does not need, or overproduce something which becomes harmful. EDCs that dock with a receptor can also lock out the correct hormone.

For example, if EDC molecules tie up enough insulin receptors, the message for cells to take up glucose can be blocked and blood sugar levels can rise to dangerous levels.

Like hackers and phishing emails, EDCs are difficult to pin down as to their source, can imitate other bad actions (over-spending on credit cards) and can manifest themselves a long time after the initial damage is done (identity theft).

But, unlike toxic chemicals that act like a suicide bombers blowing up parts of a cell and causing them to die or mutate, EDCs are message blockers, mis-communicators, and loud noises that drown out what hormones are trying to say. Significantly, some toxic chemicals can also become EDCs at very low concentrations that misguided or uninformed regulators still believe are safe.