By Lewis Perdue on May 21, 2015 in Featured, Why You Can’t Trust Federal & Corporate “Science”

The average non-scientist would have no problem recognizing any number of once-useful  objects and practices that are now obsolete in a modern, first-world country.

The Scientific Failure Of “Common Sense”

DES was a favorite drug of obstetricians in the 1940s to 1970s who prescribed it widely to pregnant women to prevent miscarriages, and other pregnancy complications.

“Common sense” indicated that was safe to use: after all, no one was falling visibly ill after use.

The same could be said of the lead water pipes of upper-class Romans. No one connected stupidity to the water at the time.

But, like today’s hormone-disrupting compounds (endocrine disruptors), DES was a stealth chemical that caused gynecological cancers — but only in a small group of test subjects and without a clear link given the state of science at the time.

Significantly, the initial studies that first revealed this link were epidemiological — a type of study that currently dismissed by endocrine disruptor skeptics  as irrelevant. Indeed, private, industry-sponsored research using the same types of outdated lab techniques as GLP, continued to insist that DES was safe.

But more valid, peer-reviewed science later proved DES caused cancer and resulted in a wide variety of serious health problems for their daughters and sons.

Despite this, the FDA still relies only on outdated GLP studies  from chemical company and private lab studies, and refuses to acknowledge similar delayed stealth illnesses with endocrine disruptors that have been shown in better and more modern peer-reviewed, published investigations.

This article in Environmental Health Perspectives (EHP) — a journal published by the National Institutes of Health (NIH) — discusses the lack of proper standards in federal science and why it is wrong to use..

Unlike the often outmoded and rudimentary “Good Laboratory Practices (GLP)” accepted by by the FDA and other regulatory agencies, “[T]he principal scientists must have demonstrated competence to conduct the research, and experimental methods, assays, and laboratory environment must involve use of state-of-the-art techniques to be competitive for NIH funding.”

Put another way: The FDA and other agencies almost always reject studies conducted under the stricter NIH rules and actually require studies done under the looser and outdated GLP rules.

This means that the FDA and other regulators do not examine the competence of scientists who conduct their studies and are okay with studies done with outmoded techniques.

Just as buggy whips and 300-baud modems still have a use in the under-developed hinterlands of Third World countries, so too do some of the techniques demanded today by the FDA.

The following are GLP toxicological techniques that can still be useful for long-established assessment of health problems such as acute poisoning or those which can be observed with the naked eye or standard optical microscope techniques.

In other words, if it can’t be seen with the naked eye, measured with a ruler or a balance scale or observed with a standard optical microscope using preparation techniques developed more than 60 years ago, then it does not exist for old-line toxicologist practitioners of GLP.

It is vital to understand that those were most everything that toxicologists knew how to do up until the last 15 or 20 years.

Equally significant, that older era of toxicologists were taught that every chemical had a fixed toxic threshold and was harmless below that level. These were the toxicologists and chemists from an era whose mantra was “the solution to pollution is dilution.”

Hormone disrupting chemicals have destroyed all that. Many old-line toxicologists simply cannot come to grips with this new world. For more, see: The Dose Is The Poison (Not Always!).

“Nano” is not in the vocabulary of traditional toxicologists who look for things on a macro scale (dissection, rulers, etc.). This is another reason why hormone disruptors elude their belief system and training.

As the EHP article noted:

“Detecting endocrine-disrupting effects at low doses of chemicals such as BPA requires sophisticated and modern assays and analyses that have been developed in advanced, usually federally funded [i.e. NIH] laboratories over the past decade.”

The effects of hormone disruptors cannot be adequately assessed with GLP which requires experimenting on hundreds or thousands of lab animals, killing and then dissecting them to look for changes in gross anatomy.

The effects of hormone disruptors, on the other hand, can only be described by investigating changes in how genes operate and looking at the complicated internal functioning of a cell’s operational and signalling pathways.

The range and depth of cellular signaling pathways is immense as illustrated below by this page of cell signaling pathway diagrams. And that listing is NOT a comprehensive listing of every possible pathway … just the pathways that the scientists who work for the company — Cell Signaling Technology — are experts in.

And the complexity of just one pathway schematic can be mind-boggling. Take the insulin signaling pathway below as an example: 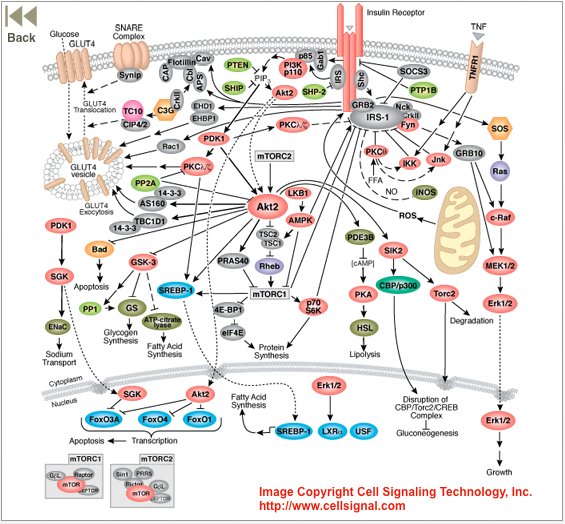 A much larger and clearer version of this image is available at the pdf download link here: Insulin Receptor Signaling Pathway

Significantly, a malfunction in any one of the connections in the pathways schematic could result in cell injury, abnormalities, and/or death.

Hundreds of solid peer-reviewed studies performed to NIH standards show that Endocrine disruptors can impact affect receptors and cellular pathways in ways that can cause or contribute to diseases or syndromes such as diabetes, obesity, cancer, developmental abnormalities, fertility problems and Alzheimer’s Disease.

Further, abnormalities in one set of pathways can cause problems that can promote seemingly unrelated health issues such as a connection between insulin imbalance and cancer. A May 13, 2015 article in Nature noted that:

“Obesity and physical inactivity also contribute significantly to colorectal-cancer risk, and here researchers have more confidence in the mechanism: they blame glucose metabolism. High levels of insulin, which the body uses to absorb glucose from the blood, seem to stimulate the growth of cancer cells, and the colon seems particularly sensitive to increased insulin.

“But exercise can halt or even reverse that cycle. The more physically active someone is, the more sensitive the body’s cells become to the insulin, improving their ability to metabolize glucose. “

Causes and contributing factors such as these are what constitute “stealth” syndromes: the negative endpoints don’t seem to be connected to the molecular-level causes and effects.

Outcomes And Endpoints: Where GLP Fails

In the end, GLP fails because it does not consider molecular and other more recently revealed outcomes and endpoint. And even if it did, the “paint by numbers” recipes that GLP requires simply does not include the most recent science and techniques to assess those end points.

This is especially apparent when one examines what is now known about functional effects of hormone disruptors on a wide range of end points.

The article in Environmental Health Perspectives uses the hormone disruptor Bisphenol A (BPA) to illustrate the fatal flaws in trying to obtain valid results while following GLP:

“These end points [of BPA exposure]  include those mediated by recently discovered estrogen response pathways initiated in human and animal cell membranes (nonclassical or alternative estrogen response mechanisms), which multiple laboratories have shown to be equally sensitive to BPA and estradiol in terms of activating effects in human and animal cells at low picomolar through low nanomolar concentrations

“The effects of BPA documented in these studies include a diverse array for which there are no data from GLP studies because the end points have not been examined:

“There is also a large literature on neuroanatomic [brain anatomy], neurochemical, and behavioral abnormalities caused by low doses of BPA which also are not capable of being detected by current GLP studies conducted for regulatory purposes because of their out-of-date assays.”

NOTE: The quote above has been edited to remove footnotes, [annotated] for non-scientific reader clarity and to create a series of bullets that makes the endpoint list more distinct.

Common sense is often wrong and is never science.

Common sense was wrong about lead water pipes, DES, asbestos, and about any number of other practices.

It was not seen as wrong at the time because science and human knowledge had not developed far enough to reveal the hazards.

The same holds for GLP which is a snapshot of obsolete science that has become mandated by the federal government even as modernity has passed it by.

It is like using a 300-baud* modem to stream a movie: The results range from horrible to impossible.