Skeptics of Hormone Disruptor dangers like to poke fun at the low concentrations that come from any single source in our environment. But never forget your body functions at those levels: your nose can detect odors in the low parts per trillion and your body’s natural hormones  are active in parts per billion and parts per trillion

But consider the grains of sand in a hour glass. One grain represents less than a second. What could the loss of a second mean in the passage of our lives?

Yet, grain by grain, time adds up to minutes and hours. And to a lifetime.

Unlike unlike lost time in our lives time, our bodies constantly battle Hormone Disruptor exposures by processing and eliminating them.

The half-life of BPA, for example, is about four hours.

Skeptics look as that and ask, “what’s the big deal?” (link)

The big deal comes with constant exposure from hundreds of sources in our personal environments. The fact that the Centers for Disease Control has found that BPA contaminates 93% of all testifies to the continual exposure and the inability of our bodies to eliminate that Hormone Disruptor.

Think Of Sand Grains On A Balance Scale

So, from that vantage point, our personal Hormone Disruptor levels should be compared to a series of balance scales. 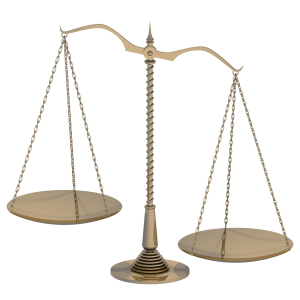 The BPA sand, however, never stops. If enough accumulates fast enough, it tips the cancer scale. Then you are no longer in cancer prevention mode, but in treatment mode.

This, obviously, oversimplifies the situation. In the case of cancer, multiple Hormone Disruptors – some of which permanently accumulate in fat cells – weigh down the left side.

In addition, each of the 10 cancer triggers from the Hallmarks of Cancer has its own scale. Tipping the scale on uncontrolled cell growth alone would not cause cancer. Nor would that tipping point be reached if combined with the resistance to controlled cell death.

But when all 10 scales get tipped, cancer starts. Some of those other scales might already have been tipped by genetic predispositions, radiation, or lifestyle factors like obesity, a few select viruses and other cancer scale-tippers.

Consider a situation where non-Hormone-Disruptor causes have already tipped nine of the cancer scales  When a Hormone Disruptor tips the tenth scale, cancer starts. Prevention ends. Surgery and/or chemo begins.

Our original research has shown that BPA alone can tip six of the ten cancer scales. Grain by grain by grain. Thermal cash register receipt, by water bottle, by athletic mouth protector.

Remember that cancer is but one life-threatening disease promoted by Hormone Disruptors and that BPA is one of many risky chemicals.

Realize also that the CDC conducted the exposure study, referenced above, more than a decade ago. Many medical experts feel that all of us are contaminated by now.

Astoundingly, no extensive research has been conducted on the health effects of the various combinations of Hormone Disruptors

All of these factors should warn us all that the accumulated grains of Hormone Disruptors –- like the grains in the hourglass of our lives – add up to something big.

The more Hormone Disruptors we are exposed to and the longer the exposure, the greater are the chances that all the right conditions exist all at once for cancer or other diseases to launch their deadly attacks.

You can buy yourself more grains in the hourglass of your life by eliminating as many Hormone Disruptors as possible. Their widespread use in modern society means that complete elimination is impossible. But the more you can avoid, the better the opportunity that you give your body to sweep them off the to keep it from tipping.