Microplastics are generally those fragments that are less than five millimeters in size. However, a single microplastic fragment rarely stays the same size.

Whether found on dry land, in steams and oceans — or in your mouth as you chew, swallow and digest — natural and biological forces relentlessly reduce microplastics in size. Eventually, many microplastics become nanoplastics measured in millonths or billionths of a meter and capable of entering any cell in your body.

Many microplastic particles can result from microscopic bits that slough off from plastic packaging, processing, transport and harvest. 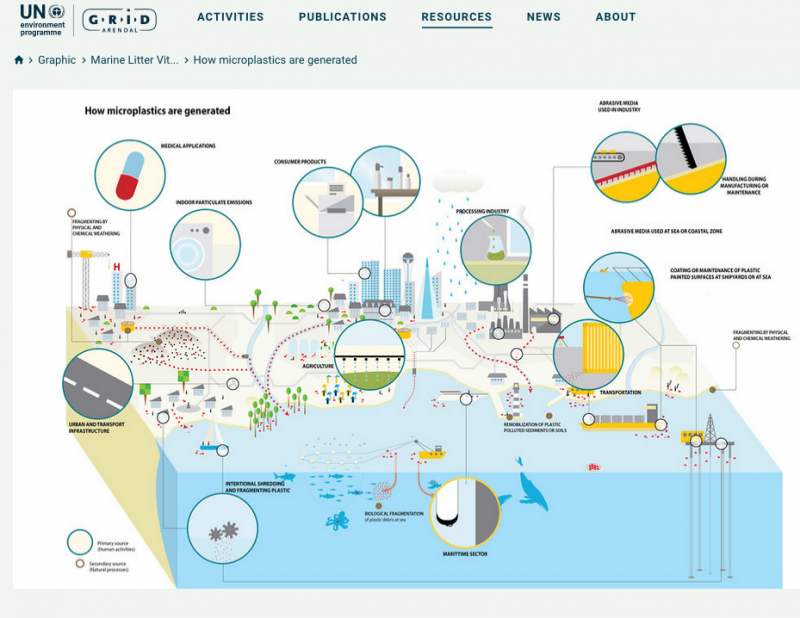 Right-click image to access a much larger version. This illustration is one of a collection available at this UN-sponsored site: Marine Litter Vital Graphics

How seriously should we take microplastics as a health risk?

From: Anthropogenic contamination of tap water, beer, and sea salt:

“Plastics are hydrophobic and have been known to adsorb chemicals from the environment such as PCBs, PBDEs, and PAHs [21], some of which are known reproductive toxicants and carcinogens [22, 23, 24]. Plastic can also adsorb metals [25] and bacteria [26], sometimes at concentrations many times higher than their immediate surroundings [27]. Furthermore, there is evidence that once ingested some of these organic chemicals can desorb in the guts of animals [28]. Plastics can also leach synthetic additives, such as phthalates, alkylphenols, and bisphenol A [29]. A more recent study indicates that plastics can be cytotoxic to human cells [30]. Finally, plastic debris can serve as a unique microhabitat for marine organisms [31, 32] and aid in the transport of invasive species [33]. These known issues highlight why microplastics are considered a contaminant of emerging concern [34, 35, 36].”

There is no complete count of the chemicals container in, or leached from, microplastics. Some of the plastic-types frequently found in micro- and nanoplastics include: Polyvinylchloride (PVC: A notorious source of BPA), Teflon (PFOA, PFOS source), PolyStyrene, Polyethylene, high-density (PE-HD), Polyethylene, low-density (PE-LD), Polypropylene (PP), Polystyrene (PS), Polyamide (PA), Polyester (PES),  Polyethylene terephthalate (PET). Those are the primary plastic composition, but most plastics are a mixture of polymers and contain additional additives. 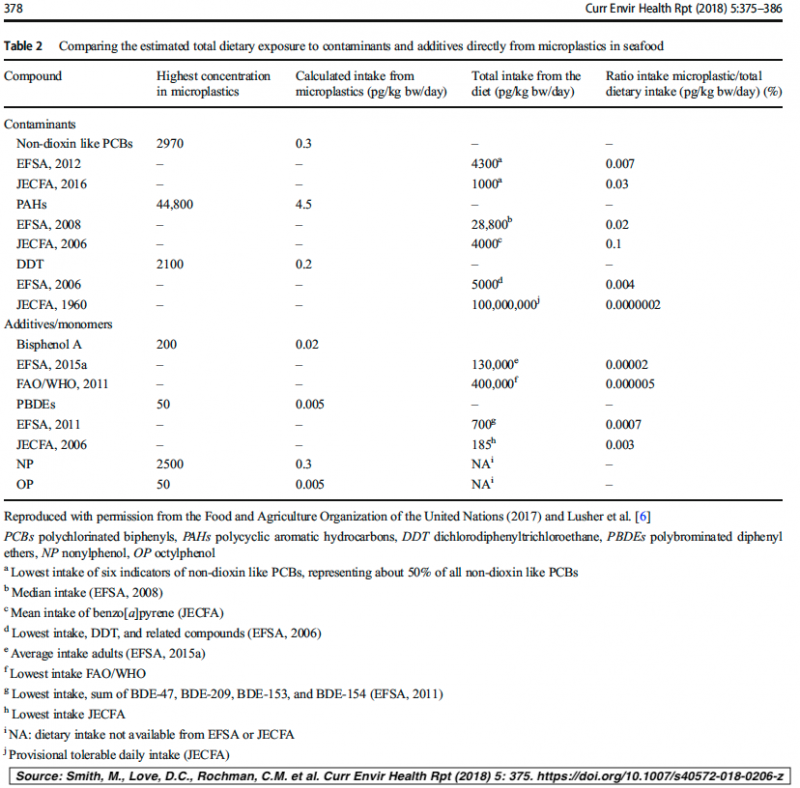 Marine organisms are particularly vulnerable to microplastic contamination because both terrestrial and airborne particles are washed into streams and the oceans by rain and wind.  Farmed seafood may be more subject to contamination than wild caught due to feed contamination. 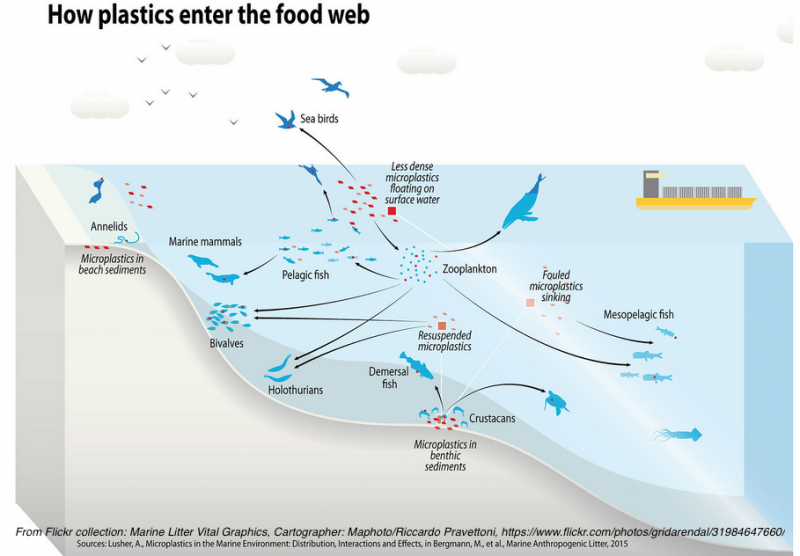 Click on graphic to view more images from this collection. This illustration is one of a collection available at this UN-sponsored site: Marine Litter Vital Graphics

Grocery store vegetables also at risk from micro- and nanoparticles

The use of  municipal sewage treatment plant recycled wastewater (aka the “purple pipe” ) and the composted human fecal sludge left behind (biosolids) is growing more common.

This, despite documented health hazards from antibiotic resistant bacteria, pharmaceutical residues including opioids as well as illegal drugs like cocaine, heroin, and fentanyl. Recycled wastewater and biosolids also contain micro and nanosolids.

In addition, there is evidence that chemicals in recycled wastewater can be absorbed by root and leafy vegetables and that traces can remain after washing. The same holds for the use of biosolids which have been shown to contain antibiotic resistant bacteria, and promote their growth.

Significantly, Whole Foods is the only supermarket chain in the United States that has published an extensive list of standards and banned substances. In addition,  in 2014, the chain banned the sale of biosolid-grown foods. and has maintained that restriction.

It is important to uhderstand that state and fedewal regulations regulations are unclear regarding the use of recycled wastewater in certified organic foods.

Best Practices: Replicability requires the ready ability of other investigators to acquire reagents (food in this case) from the same or equivalent  source. Whole Foods is the only national supermarket chain in the United States that has banned biosolids, and has published  significant transparency details regarding its foods. Until other national chains or their suppliers provide comparable data, Whole Foods would be the most accerptable source. However, it is vital to recognize that their standards have not included the elimination or reduction of plastic-derived chemicals. For that reason, additional care must be taken with specific products to minimize contamination from Bisphenol A and other plasti c contaminants.

The smaller the particle, the more potent it becomes and the harder to detect.

Nanoplastics, for example, are the most likely to invade cells because they are small enough to pass directly through the outer membrane. Evolution has not yet equipped cells with any method of rejecting nanoplastics or other nanoparticles.

Astonishingly, scant research — none on humans — has been published to assess the effects of environmental nanoplastics on the brain, behavior, or serious diseases. The current state of the science seems to rest with a handful of  studies that have found that have found physical and behavioral harms to fish.

The published literature seems devoid of publications that determine the effects of delivering Bisphenol A, phthalates or any other environmental chemicals directly to the interior of a human nerve cell — or any other cell.

No efficient, effective way to screen for nanoplastics

Because of the very small size of nanoparticles, standard screening techniques cannot be used. There are a number of developing methods, but they are plagued y inaccuracy and expense.

“Because no routine detection method exists for nanoplastic, and no data on environmental concentrations are available, we can only make plausible hypotheses on the environmental fate of such particles — hypotheses that now need verification, because the possibly high number concentrations combined with the bioaccumulation and toxicity profile and the ability of plastic to sorb hazardous organic chemicals have led to serious concerns about environmental risks.”– Albert A. Koelmans, Nature, Nanotechnology

“To this day (2017) it is not known how to detect nanoplastics in real environmental samples”  — Gerrit Renner, et al – Current Opinion in Environmental Science & Health

Micro(nano)plastics – Analytical challenges towards risk evaluation
Emergence of Nanoplastic in the Environment and Possible Impact on Human Health
Separation and Analysis of Microplastics and Nanoplastics in Complex Environmental Samples
Detection of nanoplastics in food by asymmetric flow field-flow fractionation coupled to multi-angle light scattering: possibilities, challenges and analytical limitations

Are Agricultural Soils Dumps for Microplastics of Urban Origin?

Microplastic Incorporation into Soil in Agroecosystems

Microplastics as an emerging threat to terrestrial ecosystems

The urgent need for risk assessment on the antibiotic resistance spread via sewage sludge land application.

Persistence of antibiotic resistance and plasmid-associated genes in soil following application of sewage sludge and abundance on vegetables at harvest.

Impact of manure fertilization on the abundance of antibiotic-resistant bacteria and frequency of detection of antibiotic resistance genes in soil and on vegetables at harvest.

Use of Biosolids in Crop Production

Impact of Fertilizing with Raw or Anaerobically Digested Sewage Sludge on the Abundance of Antibiotic-Resistant Coliforms, Antibiotic Resistance Genes, and Pathogenic Bacteria in Soil and on Vegetables at Harvest

Potential Upstream Strategies for the Mitigation of Pharmaceuticals in the Aquatic Environment: a Brief Review