By Lewis Perdue on February 10, 2019 in Uncategorized

Getting cancer can be a lot like playing Powerball with your health and mortality.
Like Powerball, you need to get all 10 to “win.”

This article is #1 in a new way to help intelligent non-scientists understand the confusing probabilities of how chemicals, genetics, radiation and other factors can cause cancer.
It’s vital to understand that having all 10 factors present at the same time doesn’t mean a cancer will inevitably develop. However it means that all the necessary conditions are primed for a cancer to occur and that you can lead a healthier life by “uncollecting” carcinogens that trigger any of the 10  hallmarks.
Read this  — and the other articles below — for a deeper understanding.

In Cancer Powerball, there are 10 numbers — nine regular numbers and the #10 “bonus” (metastasis) Powerball that increases your chances of winning the jackpot — dying. An you have no other choices. 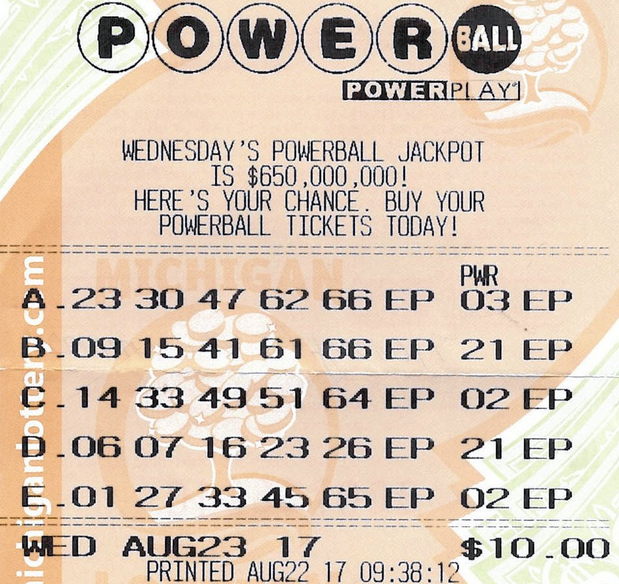 With Cancer Powerball, your odds of “winning” are millions of times lot more likely.

The overall lifetime odds of getting cancer are about 1 in 3 for Americans. and 1 in 10 of dying from it, according to the American Cancer Society. See the tables and calculations at the bottom of this article to learn how that number was derived.

Fortunately, you can cheat at Cancer Powerball

Unlike Powerball, you can determine (or avoid)  your Cancer Powerball ticket numbers ahead of time. Your “ticket” sometimes gets punched by Hallmark Factors: Things that are capable of mutations like genetics, but more often by chemicals, radiation, ultraviolet light and other factors that are known.

You can’t do anything about your genetic code. But because many of the numbers have known causes, that allows you to “cheat” by altering diet, lifestyle, and avoiding chemicals  you can play the system and create your personally better odds. Avoiding Bisphenol A, for example. BPA can punch all 10 Big C Powerball numbers.

(More BPA and cancer links here. A more targeted, BPA/Cancer Powerball (CPB) odds article on those links is in progress.)

How the Cancer Powerball odds can sometimes change in your favor

When you buy a Powerball ticket, the numbers never change. You get what you select. (It is important to note that, if you have a genetic predisposition for one or more CPB numbers, then every cell in your body starts out with a permanent CPB number checked off. Those, like Powerball numbers, won’t change.)

However, with Cancer Powerball, some factors may work in your favor. How that happens is currently unknown. This is because “cancer” is a catch-all phrase that encompasses many complicated diseases which share the hallmarks in common.

Cancer is not inevitable even if all 10 numbers get checked

Genetics or a simple exposure of one chemical are not fate. Just because all 10 numbers get selected for a particular cell or tissue in your body doesn’t make cancer inevitable. It just means the conditions are right.

There are many unknowns in why one particular individual gets cancer:
One or more of the Cancer Powerball numbers may get unchecked because a chemical has not been present long enough, or perhaps your body has found a way to destroy the rogue cells. These are things science doesn’t yet know.

The Hallmarks of Cancer are widely and solidly accepted. Much therapeutic research is being directed to address one or more of the hallmarks. The theory in disrupting even one hallmark is that it breaks the carcinogenic chain necessary to sustain a malignant tumor.

The logic of disrupting a single hallmark is at the heart of a new class of class of cancer therapies that attack the uncontrolled proliferation of cells. These drugs — CDK4/6 inhibitors such as palbociclib and multi-CDK inhibitors such as dinaciclib have shown positive effects and have received FDA approval.

What is currently unknown is how and why all 10 hallmarks must be active.

Can one or more hallmarks damage cells permanently, leaving them sitting ducks for future attacks of other hallmarks? Do all 10 have to be present at the same time? How long would all 10 need to be present to overcome the repair mechanisms of cells?

In addition, the constant exposure to the many different Hallmark Factors that can punch a CPB number (or all of the like BPA) means that most of your cells probably have accumulated one or more.

First, cells affected by Hallmark Factors have ways of repairing or destroying themselves.

For example, BPA can check off all 10 of the 10 Cancer Powerball numbers. It’s possible that internal cellular processes could “erase” one or more.  Other chemicals you are exposed to daily will also checkoff Hallmark Factors. But,with BPA, a number is unlikely to stay unchecked. That’s because you are constantly exposed to BPA.

The U.S. Centers for Disease Control says that at least 93% of Americans carry constant levels of BPA in their bodies. Because of that, re-exposures — and a new Cancer Powerball number in  a given cell are probable.

First, it’s important to realize that every cell in your body is created with a CPB ticket that can be punched.

Also keep in mind that billions of cells in your body are being exposed to varying concentrations of chemicals and other mutagens. But not every cell is exposed to each of the various Hallmark Factors all the time, or at the same time or at all.

All it takes is one cell — or group of nearby cells — to hit the first nine CPB numbers — for a cancer tumor to start. At that point, your body’s various defenses may or may not wipe those out before the bonus CPB (metastasis) can start spreading it around.

The 10 Cancer Powerball numbers to die for: Based on The Hallmarks of Cancer

The numbered Cancer Powerball descriptions, below, offer a brief explanation of those developed in more detail in the original scientific paper.

The links associated with each number go to posts — in constant progress — which will offer a deeper dive into each one. The pages at each of these links is a “stub” which we will constantly add to.

01. Uncontrolled cell growth. This can result in malignant tumors or in massive amounts of deadly cells in the blood or bone marrow. 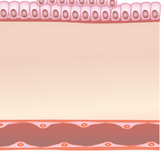 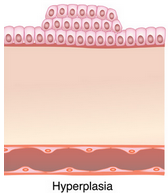 02. Evading the body’s defenses against uncontrolled cell growth. Normal cells send out chemicals that act as signals to nearby cells which help control growth.

03. Preventing the body from dismantling damaged, aged or obsolete cells in an orderly manner. The human body has a programmed cell death process called apoptosis that effectively dismantles cells, disposes of unusable molecules and recycles the rest for controlled use by the body.

Cancer cells, can consume cells whole, or cannibalize damaged cells and their contents to use for energy and as the building blocks of more malignant cells.

Inflammation can cause surrounding cellular damage and destruction. Cancer can use the resulting cell molecules for nourishment, to incorporate into malignant growths, and spur the body’s immune and repair systems to grow new cells and blood vessels.

05. Growing new blood vessels. Malignant tumors need to feed themselves. They do this by emitting chemical messengers that trigger the creation of new arteries and veins. This is called angiogenesis which also provides oxygen. 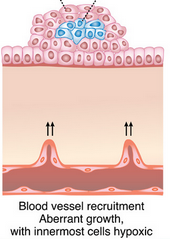 06. Genome instability/mutation. Cancer has the ability to change alter DNA sequences in of cells in ways that allow the other nine cancer hallmarks to flourish. Some of this involves chaotic cell division that produces genetic instability that often results either in cell death or in cells that can resist therapies.

07. Creating immortal cells that lack the genetic instructions to prevent limits on growth.

08. Reprogramming Cellular Metabolism. Healthy cells are powered primarily by a specific type of sugar (glucose) that comes from the food we eat and needs oxygen to be metabolized.

This is called oxidative metabolism. Cancer cells can reprogram cellular metabolism to use other molecules for energy. One of the most common of which is glutamine. This is called glycolysis.

09. Evading Destruction By The Immune System. Cancer cells have the ability to masquerade as normal cells and lack the  surface signal molecules that the immune system recognizes.

10.  Metastasis & breaking down the “glue” that holds cells together in a tissue. Metastasis represents the “Powerball” in this cancer lottery because it is responsible for 90% of deaths.

This allows the cells to break loose and spread to other parts of the body and invade healthy tissue.  Metastasis is a key factor in cancer deaths. This is because many primary cancer tumors can be successfully excised. But when cancer has spread, successful treatment frequently fails. 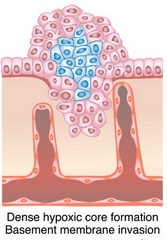 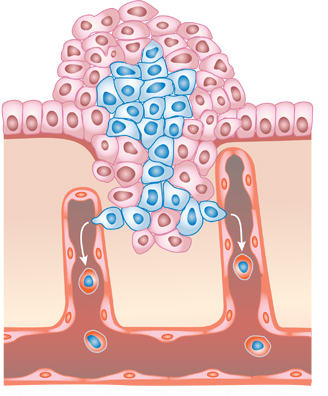 Tumor taps into a blood vessel. Malignant cells that have come loose from the tissue enter the bloodstream (or lymph system) and spread the seeds of new cancers.

I am searching for appropriate images and screen captures to illustrate the 10 sections below, and to use in expanding each of the corresponding posts. I am diverting time to explaining which of the 10 hallmarks are triggered by Bisphenol A, phthalates and other environmental chemicals.

However, until that is accomplished, the following videos are excellent choices for digging deeper into the hallmarks:

How the Cancer Powerball’s odds were determined

The odds of hitting the Cancer Powerball jackpot (dying) is approximately 1 in 10. The odds, below, were estimated by taking the 1-in-3 odds (33%) calculated by the American Cancer Society and multiplying that by the death rate in the tables below (31% – the percentage who did not survive 5 years). That yielded an estimate of 10.23% — roughly odds of 1 in 10. 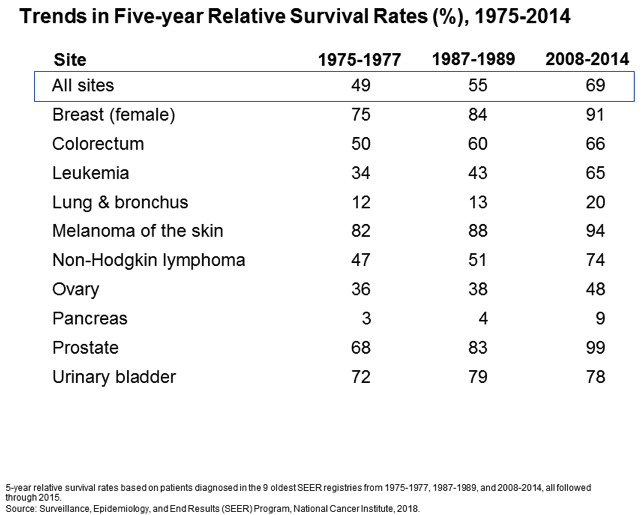 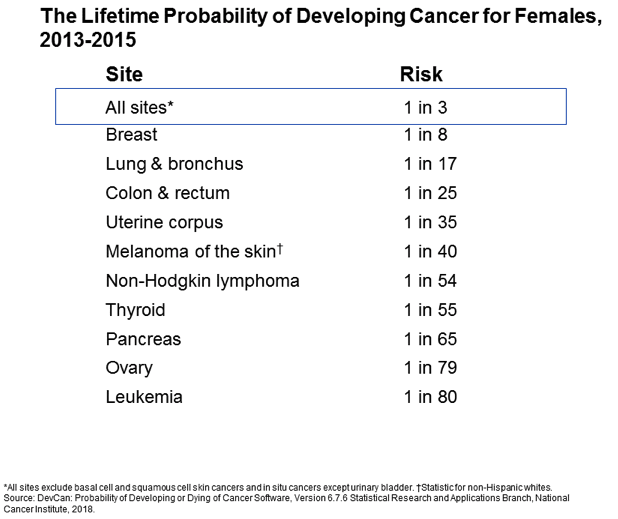