By Lewis Perdue on February 1, 2015 in Cancer, Featured

This article has two companion pieces — “Cancer: The Perfect Storm On Planet You” and “Cancer And Voldemort: 10 Horcruxes To Disaster” — that help explain to the non-scientist how luck plays a very small part in the origins and avoidance of cancer.

Cancer has about as much to do with bad luck as broken mirrors, spilled salt and the number 13. In reality, cancer is not a simple matter of luck despite the implications from a flawed study published in early January 2015.

That study focused narrowly on the statistics of how many times specific types of cells divided. It was incomplete, overemphasized several extremely rare types, and failed to include significant types such as breast and prostate.

The study’s conclusions contradict most established research. The study was at its worst when it stated that “only a third of the variation in cancer risk among tissues is attributable to environmental factors or inherited predispositions. The majority is due to ‘bad luck,’ that is, random mutations arising during DNA replication in normal, noncancerous stem cells.”

If the “bad luck” study were accurate, it would mean that lifestyle and environmental choices have little to do with reducing risk.

The study’s many scientific problems have been well addressed by a number of prominent scientists and organizations:

Those pieces, above, have done a thorough and eloquent job of addressing many of the scientific issues.

This piece, then, will focus on ways a non-scientific audience can understand how cancer starts and why reducing risks involves a lot more than acquiring a rabbit’s foot as juju against bad luck.

Cancer Can Have Genetic Predispositions, But More Is Needed To Trigger Malignancies

The “bad luck” study assumes most cancer is caused by genetic mutations, and that it’s just your “bad luck” you can’t do anything about your genes.

The study incorrectly assumes that mutations occur randomly, and ignores the fact that environmental chemicals, radiation, endocrine disruptors, and even the malignancy process itself can create mutations and “epigenetic” changes in gene function.

Epigenetic changes involve molecular changes to a gene that do not alter the underlying DNA bases, but which can shut down the gene’s ability to create a specific molecule or prompt it to create too much – or too little.

While it is true that genes can provide powerful pre-dispositions to certain types of cancers, they are not destiny. Not everybody with a mutation gets cancer, and many people without mutations do.

As just one example, the National Cancer Institute says that: “About 12% of women in the general population will develop breast cancer sometime during their lives.

That is a serious risk, but it also means that approximately 1/3 to 1/2 of women with these mutations will not get breast cancer.

This is not to underestimate the dangers of cancer, but to show that genes – while important – are not destiny. Further, it illustrates how prudence, knowledge and personal action can lower cancer risks.

Lowering risk is vital because American Cancer Society data indicate that 44% of all American men and 38% of women will get cancer in their lifetime. Half will die from it.

See the following articles for a deeper discussion of those events.

Clearly, the “bad luck” emphasis on genetic determinism indicates, incorrectly, that one can do little to reduce personal risk.

A special section in the Dec. 4, 2014 issue of the scientific journal, Nature (Nature Outlook: Liver cancer), offered a prime example of how much off the mark the “bad luck” study was. Liver cancer is due almost entirely to known and avoidable environmental and behavioral factors.

Liver cancer is important to consider because its incidence is low, but mortality is high. The latter is attributable to the fact that liver cancer is usually not detected until its final stages.That means only 17% of people survive for five years after diagnosis. 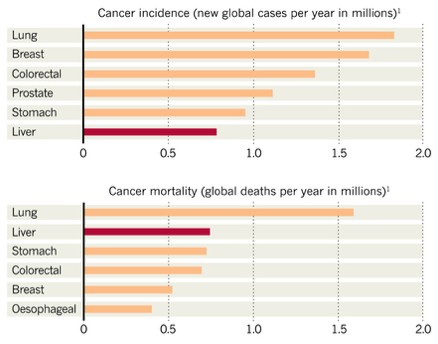 In direct contradiction of the “bad luck” theory of cancer, a Nature Outlook section uses data to show that:

Good sanitation, vaccinations, maintaining a normal weight and avoiding risky behavior such as alcohol abuse and needle drugs offer ways to reduce risk that have more to do with personal action than luck.

Likewise, risk can be reduced by avoiding sources of contaminated peanuts, cashews, corn and other food where aflatoxins are found.

While the three factors, above, account for the vast majority of HCC, the Nature Outlook tells us that there is a small, unavoidable genetic component. Men are twice as likely as women to contract HCC. So, the genetic portion may be linked to the Y chromosome. A lot may also be behavioral since men are more likely to engage in risky behaviors than women.

This is certainly not an exhaustive look at the non-genetic causes of all the cancers looked at in the flawed study, but it illustrates the flawed logic in the “bad luck” thesis.

Cancer And Voldemort: 10 Horcruxes To Disaster
What Is The Stealth Syndromes Project?